There's This Amazing Girl And Her Name is Loli! 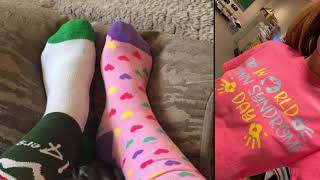 On December 21, 2017 at 0214 hours, Daxtyn Kai Gabbart was born at OU Children’s in OKC, OK. He was born with Coarcation of the Aorta and a complete AV Canal defect which sadly claimed his life a few months later on March 23, 2018. He was the son of Crystal Hollingsworth and Lucas Gabbart; he was Crystal’s first child and Lucas’ fourth. He was the youngest brother to his three brothers. He loved to be held and would look around at any and everything. He loved his paci and if you tickled his tummy or feet, he would give you the dirtiest look, but he would never get mad at you. During his three short months here on earth he had an impact on so many lives and was adored and loved deeply by family and friends. He opened up so many doors for his parents and made them better people. Not only did he inspire them, he opened up their world to so much by teaching them to learn more, reach out more, and he taught them strength. One of their greatest achievements with Dax was getting to take him home from the hospital; this was huge in their family, as they thought that day would never come.

Daxtyn was truly one of a kind. Although he was diagnosed with Trisomy 21, his condition was slightly different, as he only had an extra half copy of his 21st chromosome that had attached somewhere between his 21st and 23rd. Due to his rare case, they were not too sure where he fell on the DS spectrum. His case was unique as there were not any other cases like his. When his parents spoke to a geneticist at OU, they had no recollection of seeing anything like this. Although he was diagnosed with this rare case, he still presented few DS characteristics and traits. Dax’s mom stated “I was so excited for Daxtyn and for the geneticist to follow him and study him, just as I did. I was looking forward to that! That was my favorite thing about Dax, knowing there was no one like him and I got to be the one to care for him and raise him in the short time he was here.”

Around Crystal’s 14 week appointment, she was told the genetics test came back positive with a high chance of having a baby with DS. Her OB suggested she undergo more tests to get a more in depth look into her baby’s condition and they found that Daxtyn had a heart defect that needed to be corrected post birth, at that time; they did not confirm that he had DS. A few weeks later, around her 19 week appointment, they were convinced that he had DS and started to prepare as much as possible. They started to educated themselves on everything related to his condition. On September 7, 2017 OU Children’s OB/High Risk Clinic performed an amniocentesis that later confirmed the positive diagnosis of Down syndrome. During the later course of her pregnancy; Crystal started to have some complications, she struggled with edema, hypertension, and headaches. She was hospitalized in November for three days and was told she needed to take it as easy as possible. She delivered Daxton at 37 weeks and two days due to poor intrauterine growth.

Crystal’s first reaction to finding out that she was having a child with DS was the feeling of being scared. She was scared initially, because growing up she was always told that DS was devastating and the life expectancy was typically short. “Luckily, I had not done research and a whole new world opened up as the DS community has progressed and learned so much and life expectancy had grown. After the initial shock and thinking this could never happen to me, I started to grow fond of the idea; we warmed ourselves up to the DS community and grew eager and excited to start our journey with our sweet baby boy!” After Daxtyn was born, they never explained in full detail about DS or his condition to his brothers, his brothers loved and accepted him as another brother and never treated him any different. That was their goal, to not have people treat him different due to his condition, they wanted to make sure he was included, accepted, and not made fun of or mocked as he grew up. Crystal was never scared of having a child with DS, but was more worried that people would not understand him. The one thing that Crystal hopes Daxtyn knew, was that his momma was ready to battle with him through it all: surgeries, CHD, all the trials and tribulations and all the odds against him, his momma was ready to fight to give him the best possible life she could give him. She was ready to fight the tough fight, because he inspired her to be the best that she could be and he taught her to be brave and not scared. She was so inspired by his bravery as a baby.

Crystal’s best advice is “educate yourself as much as possible. You’re allowed to be scared, you’re allowed to be upset and cry, but it does not define you or your child’s life. You will go through every emotion in the book, but one of the best things you can do is educate yourself as much as possible. Join support groups, reach out to doctors if you have questions, and do not be afraid to speak up, because you are that child’s or baby’s voice.”

Although they are still trying to figure out how to deal with the loss of their son, they are doing everything they can to keep his memory alive. She will always remember her baby boy, his huge personality, and smile when she thinks about the first time she saw him, holding him, and soaking up being a new mom, she loved every second of it and even though she was exhausted, she never complained, because every waking minute with Daxtyn was worth being tired. Some ways they are keeping his memory alive is with their Baby Daxtyn page on facebook and Instagram pages: down_is_up_with_Daxtyn and Daxtyns_momma. In addition to that, the town they reside in is interested in doing a fundraiser for Daxtyn and they are going to start a scholarship fund in his name to help his brothers and cousins through school. They also have a Daxtyn garden at their house, as well as at various family members’ houses, they are making a baby/memory book for him, and a shadow box. Although Daxtyn is now an angel, they want to make sure he and his story live on. They want the world to know he was a unique and special boy and although his life was cut short, every moment they were blessed to spend with him was a blessing; every bit of it was their favorite

moment they were blessed to spend with him was a blessing; every bit of it was their favorite.